The facts about ADA website requirements and how to be compliant

Over recent months, the media has been reporting a slew of lawsuits and fines dealt out to businesses for failing to operate in compliance with the American Disabilities Act. Specifically, the lawsuits relate to legal precedent set in 2017 stating that when a bricks and mortar business runs an online store, it has the same obligations under the ADA in cyberspace as it does in the physical world.

On the face of it, the ruling means that a site must be able to accommodate those with visual or hearing impairments, just like a store needs to have facilities for those in wheelchairs. It has, to a certain extent, opened the floodgates, particularly in locations like New York and California, where litigation-hungry lawyers are only too eager to fan the flames among potential litigants.

With that backdrop, it is easy to get caught up in the emotion and media buzz. However, what are the facts, and how can you ensure your site is compliant?

It all began in a Florida courtroom in June 2016 when Judge Robert Scola Jr. ruled that Winn-Dixie had violated Title III of the Americans with Disabilities Act (ADA) because its website was inaccessible to Juan Carlos Gil. Gil, from Miami, is legally blind and has cerebral palsy. He uses a JAWS screen reader as his window on the world of cyberspace to access web content.

For those who are unfamiliar with it, Winn-Dixie operates a chain of grocery stores and pharmacies across the United States. While not focusing on e-commerce as such, it does have a website that enjoys significant traffic. One of the major draws here is almost certainly the range of coupons and discount offers that it regularly posts. Gil found that the reader he used was unable to access certain parts of the site. Critically, these included the coupons, as well as the store locator function.

The interesting point to note here is that these are add-ons that are operated by third-party vendors. However, the court ruled that this did not absolve Winn-Dixie of its responsibilities to ensure the site is fully accessible to individuals with disabilities. Specifically, it said: “many, if not most, of the third party vendors may already be accessible to the disabled and, if not, Winn-Dixie has a legal obligation to require them to be accessible if they choose to operate within the Winn-Dixie website.”

In effect, the court ruled that Winn-Dixie must ensure its site adheres to the guidelines set forth in the Web Content Accessibility Guidelines WCAG 2.0. This caused some raised eyebrows in the web design community because ostensibly, WCAG 2.0 is not a legal requirement, but a voluntary standard for website accessibility. The effect of the Winn-Dixie ruling, however, is that the guideline has become the yardstick by which accessibility is measured.

Following his success in the Winn-Dixie case, Juan Carlos Gil has embarked on a further series of litigations against other sites that have not adopted WCAG. A piece in the Miami Herald reported that one year on from Judge Scola’s decision, Gil had launched a further 70 lawsuits along similar lines. No doubt that number is now into three figures and others are following his lead.

To take a step back from the lawsuits and hysteria for a moment, it seems clear that there is a simple solution for site owners here. Ensuring your site is accessible to all is always going to be worthwhile from a traffic and reputational perspective. The fact that there are potential legal risks attached to not doing so should merely serve as an additional driver to achieving WCAG compliance.

In June of this year, WCAG 2.0 has been superseded by WCAG 2.1. This latest release has some additional standards but is not substantially different to WCAG 2.0. It is worth keeping in mind that as far as the legal actions for accessibility are concerned, WCAG 2.0 still seems to be the yardstick to which courts are referring.

Both versions 2.0 and 2.1 describe three levels of compliance, which are A, AA, and AAA. From a legal protection standpoint, most accessibility legislation demands compliance with Levels A and AA.

WCAG covers a range of areas, and it is not the intention here to explore them in depth. It is, nevertheless, worth briefly running through each of them in turn.

Non-text content, such as images and videos must have text alternatives. This is to allow such content to be converted into alternative forms such as speech, braille or large print. This is a familiar concept as far as images are concerned, but it is worth keeping in mind that video content is also inaccessible to many people, including those with sight or hearing difficulties. Text alternatives and captioning are useful for everyone, however, and have been shown to have a positive impact on user experience.

Developers should ensure content is created in such a way that it can be presented in alternative forms without loss of structure or information. This is aiming at users like Juan Carlos Gil who use special software to consume content, whether this might be audibly, visually or tactilely.

Content needs to be easy to read and understand, either by the users themselves or their assistive technologies. Some users might have problems recognizing specific words or understanding their meanings. Of course, where assistive technology is used, clearly defined and unambiguous language is even more critical.

All website functions, links, and buttons must be accessible through keyboard actions alone. Keyboard accessibility is a highly flexible means of navigation that is universally supported. It benefits a whole range of users, including those with sight problems, limited motor abilities or limited muscle control.

Content needs to be easy for every user to read, see and hear. In practical terms, this means background with sufficient color contrast, foreground sounds that are not drowned out by background noise and so on. This provides optimum clarity for those with sight or hearing difficulties.

“Mobile first” is a phrase with which everyone is familiar. Clearly, this is as important when it comes to accessibility as it is with anything else. Site content needs to be compatible with assistive technologies across all platforms including tablets and smartphones.

If the site requires specific inputs from a user, such as completing forms, they must be given sufficient time to do so. Those with physical disabilities might take longer to comprehend the page content then formulate and input the required responses than others.

The site should provide multiple simple and intuitive ways that users can navigate content. The idea here is to ensure they can locate what they need and not get lost down blind alleys within the site.

A mechanism should be provided that will help users correct errors or avoid making mistakes in the first place. This requirement aims to reduce the number of errors and alerts and improve the accuracy of information that users are inputting.

Web pages should appear and function in ways that are predictable. This makes it easier for those who have a limited cognitive function or are using assistive technology to navigate a site without confusion.

Sites should avoid content that can trigger seizures and should be actively designed in such a way that will minimize this risk.

Does your site comply?

Reading through the above list is enough to send most site owners into a state of controlled panic. However, while it looks like a lot, many of these requirements can be fulfilled relatively easily with the addition of simple plugins. 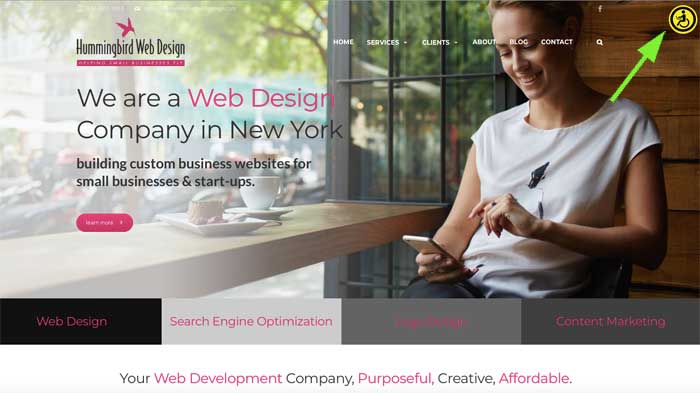 Take a look at the landing page of Hummingbird Web Design website to get an indication of what can be achieved. The yellow button in the top right corner provides a range of functions that neatly check off many of the requirements listed in WCAG 2.0.

Other aspects are neither more nor less than good practice when it comes to web design, and getting these in place will only serve to benefit overall user experience, thereby boosting traffic and improving SEO.

Having a website that is accessible to those with special needs is a win/win for everyone. It is a triumph for inclusivity, it ensures legal compliance, it increases traffic, and it improves brand awareness and image. After all, around *30 percent of working professionals have a disability of one sort or another, and more than 70 percent of those with disabilities say that if a site is inaccessible, they hit the back button immediately and never return.

Besides, it is not as challenging a task as many people might think. To discuss your site and how Hummingbird Web Design can help ensure it complies, call 516-883-3851for a free consultation.

To see a related blog regarding the visually impaired click here.